The last drops of wine

In the bottle remain

Eighty Four years of life on this earth

Your eyes feasted on war after war

But, the belly felt the the pain and rumbling

As it was never filled

There were memories of nazis storming the village

Then the civil war where your father was taken, and tortured

The great loss and poverty

In the silent generation

‘Wealth through industry’ was the motto

But, no matter what they built they remained bitter

This life made you hard, made you angry

And the new world offered an escape

Profits, but not without hard labour

From the tobacco fields to builder

The parties, the dancing, music, the laughter

The feasting, all of the families, and friends

The cup filled to the brim

But, it had to end

Oh how they always haunted you

Then back to the old world

That was the dream,

Because you could never

Too much to do

Now you rest in peace

As your bones will too.

*In loving memory of my father George, who after a long, hard battle with cancer of the bones succumbed to the illness on the 9th of November.

“There is no pain so great as the memory of joy in present grief”.-Aeschylus

The Peloponnesse is a truly magical place with immense history, and architecture and landscapes. It’s never a dull moment with ever-changing scenery

These photographs were taken from a moving vehicle from as far North of Nafpaktos to Palaio Epidavros and as far south as Laconia.

Some photographs of Kala Nera, a resort on the Pagasitic Gulf in Pelion. It is just 18km from Volos.

I took the photographs in the summertime on a overcast day, which is odd for the month of August in Greece. It is a nice little village with some very good tavernas that offers delicious food.

The medieval town of Monemvasia is seeped in history. It is one of the oldest continually-inhabited fortified towns in Europe. The town has been inhabited since antiquity and was a Minoan trading post.

Monemvasia was founded in the 6th century, from the relocation of the inhabitants of Ancient Sparta, which was then known as Lacedaemon.

There are many byzantine churches in the town. And many ruins of older settlements.

The climb to the top of the fortress offers spectacular views of the town. Good foot wear, patience and stamina is needed!

Monemvasia is small medieval town that is situated on an island. It is located in the municipality of Laconia in the South East coast of the Peloponnese. The town’s name derives from two Greek words, moni (μόνη, ‘single’) and emvasis (έμβασις, ‘approach’), together meaning “city of the single approach, or entrance”. The island is connected to the mainland by a short causeway 200 metres (660 ft) in length.

Walking in the entrance of the town is like walking into a film set in medieval times. It is a breathtakingly beautiful place is well worth the visit. It is a four hour drive from Athens. t I went in early October and it was a very hot day. I can’t imagine how hot it is in July or August. I was thankful to have gone in October as the lower temperatures made the tough climb up the top of the fortress a little easier.

Trizonia island is a little piece of unknown paradise in the Gulf of Corinth. Many Greeks have not heard of this low-profile island. Since it is not a popular travel destination, there were very few foreign tourists and the few visitors were mostly from organized tours in Greece.

Legend has it that, Billionaire shipping tycoon, Aristotle Onassis fell hard for this island, and made a bid to purchase it, but the bid didn’t pass. He then acquried the island of Scorpio in the Ionian sea instead.

Some ‘golden hour’ photographs of the RIo-antirrion bridge in Patras, Peloponnese. The photographs were taken on the ferry boat back from a trip further north.

The view of the RIo-antirio (also called Charilaos Trikoupis) bridge from aboard a ferry boat are stunning. The remarkable RIo-Antirio bridge is an impressive modern wonder. It was completed the day before the Olympic games in Athens on the 12th of August 2004. It is one of the world’s longest multi-span cable-stayed bridges and longest of the fully suspended type. It crosses the Gulf of Corinth near Patras, linking the town of Rio on the Peloponnese peninsula to Antirrio on mainland Greece by road.

It was the vision for the Charilaos Trikoupis (Prime Minister of Greece) had more than a hundred years ago, to connect the narrow sea passage between Rio and Antirrion, became a reality. But, Greece lacked the finances. The bridge was planned in the mid-1990s and was built by French-Greek companies.

The port of Rio in Patra, in the Peloponnese, where I am about to board the ferry boat to cross the Gulf of Patras. The ferry boat ride offers fantastic views of the Rio-antirrio bridge as we will see in my next post.

While at Hydra I was lucky enough to view and photograph Amercian artist Jeff Koons’ sun scultpure.

It is an impressive sculpture that fits into the scenery of the island. It is a two-faced sun and is quite big. the sun rays spin slowly around.

Follow My Creative Wayz on WordPress.com
Join 853 other subscribers 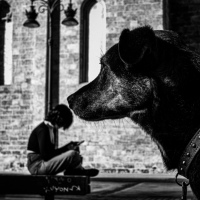 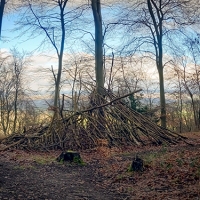 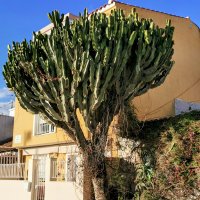 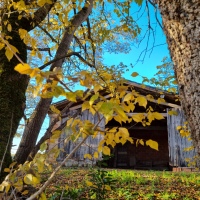